“It’s often said that “sharing is caring,” but there may be a bit more behind one’s decision to be generous to others than a propensity for kindness and empathy. A new study of monkeys may reveal just how much brain chemistry plays a role in whether or not we choose to help out our fellow woman and man.”

Brain Activity In Monkeys May Shed Some Light

“Monkeys are highly social animals that live in groups called troops, but they’re not always very cooperative with other members. In fact, they’re known to act quite selfishly to assert their dominance or when resources are scarce. Interestingly, researchers at Yale University have recently identified specific patterns of brain activity that determine if a monkey is in a sharing mood or not.”

“Studies in humans have identified many candidate brain regions that drive decisions to share. For this particular trial,” in monkeys ” the researchers selected two brain regions to examine more closely: the amygdala and the medial prefrontal cortex.“

“Researchers presented pairs of rhesus macaques with one of two scenarios where they had to decide if they would share juice with the other. This was done while the authors recorded activity in the amygdala and medial prefrontal cortex activity in the macaques’ brains.”

“Monkeys hate to see good juice go to waste, so in the first scenario they would typically give the juice away. But they weren’t as nice when they had the option to drink the juice by themselves.”

“It turns out that the decision to share and the decision not to share can be identified by the rhythms of brain activity between the amygdala and the prefrontal cortex.”

Additionally, the activity of the brain regions occurred at different frequencies depending on which decision the monkey made.

“We found a unique signature of neural synchrony that reflects whether a pro-social or an anti-social decision was made,” says Steve Chang, the senior author of the paper and an assistant professor of psychology and neuroscience at Yale University, in a release.”

“The findings of this study suggest that the coordination of the activity between the amygdala and the prefrontal cortex regulates social-decision preferences.”

“We all know there are individual differences in levels of generosity,” adds Chang. “Maybe Scrooge did not have high levels of synchrony after all.”

The study is published in Nature Neuroscience.

Like Loading...
Dear Freddie Fans and other creatures,
Lyn is Remi’s human.  Because Remi is a very busy canine dog, helping Lyn (he even carries items to the laundry room and puts them in the hamper for her) and working at the senior center I asked Lyn to write this instead of Remi – who deserves some time off.

“I had been “dogless” for a number of years due to my work schedule and life circumstances, but had always held on to my hope of one day having a therapy dog again.  In 2008, I found myself in a place where I could seriously consider finding a puppy that I could bring into my life with that goal in mind.”

“Since I used to be an animal trainer and behaviorist, I had a very good idea of what breeds I thought would be the best fit as my companion and the best possibility of being certified as a Therapy Dog.  After months of searching and meeting lots of dogs, I was fortunate enough to find a woman who raised Goldendoodles (hybrid of Golden Retriever/Standard Poodle).  After meeting lots of her dogs I found what I felt would be the perfect new addition to my life.”

“Remi actually picked me more than my picking him ( I thought I would prefer a female, but Remi had other ideas.)   He stood out from all the other 18 puppies.   I was so impressed with his focus on me, his responses and his wanting to interact and figure out what I was doing with him from the minute we met.  Not to mention, he was absolutely adorable!!”

“I brought Remi home when he was 9 weeks old and we began our life together.  He has, from the very beginning, been the most loving and devoted dog I have ever had the privilege of spending time with.”
I named him
Remington Royce Glover
(Remington – inspired by Frederic Remington, one of my favorite sculptors/illustrators). 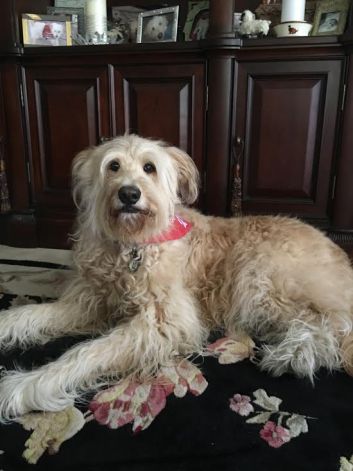 Royce – the definition is a perfect description of  my boy Remi:

He is amazingly smart, learns so quickly and absolutely loves everyone he meets.”
“In addition to all the basic obedience commands, Remi’s repertoire of behaviors include:
“When I launder his toys, he waits in the laundry room and watches for me put them in the dryer.  When the dryer buzzer sounds to let me know they’re dry, he runs back in and waits for me to open the door of the dryer so he can take them out.”

He is “toy” obsessed and will do anything for a stuffed toy.  His favorite toy is his “caterpillar” which he carries everywhere, inside or out.  He has an abundance of toys and knows most of them by name, but his “Catypillar” is definitely the one he prefers.

“Remi  knows three of our neighbors by name and where they live.  When we go outside, if I say, go see if “so and so” is home, Remi runs to their patio door and waits to see if they are there.  They all love him and if they’re home, they open the door and let him in – they don’t let me in, but …….. (just kidding)”

“Spending time with him and watching him learn and grow into the wonderful boy he is has been so rewarding for me.  As anyone who shares their life with animals can tell you, the unconditional love they offer is amazing. One of the best things about being with him and taking him anywhere is that no matter where we go or who we meet, he is always happy, smiling and excited to be there.”
“Whether we’re walking down the street, meeting children or visiting seniors at the care facility, people look at him and smile!!  Watching  people’s reactions to him is so heartwarming and satisfying.  He just makes people happy – and in a world so filled with fear, stress,  unhappiness  and conflict, I think that is just a wonderful gift for him to give.  I’m so proud of him and honored to be a part of it with him.”

Besides people, Remi has 3 cat siblings that he also loves –
playing with Dashiell, his favorite. 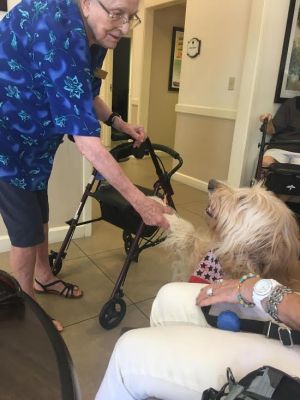 “Remi and I currently go to visit a Senior Care Facility every Friday morning – he absolutely loves it and the feedback we receive is that the residents just love seeing him and the other two smaller dogs that accompany us with their owner.  It is so gratifying to see the seniors “light up” and spend time with the dogs.  So many of them tell us stories of the dogs/pets they used to have and recall such lovely memories.”

Remi and his “visiting buddy”, Paulie, at the Senior Center, waiting for one of their favorite people to get to them!

“One resident was very disparaging when we first visited.  She had never been around dogs and had nothing good to say to us, but we’re slowly winning her over.  She now walks by and comments that the dogs are “very cute”.  She still won’t come too close and refuses our offers to have her pet them, but we’re optimistic that will happen!”

“We are hoping to find a way to work with disabled veterans who have served our country and offer them whatever help and joy we can by visiting them at their rehab facility – it’s an ongoing goal for us and one I hope I can find a way to make happen.”

“Watching him makes me want to follow his lead and try to focus on making others happy, rather than worrying about “stuff” in my life.”

“Thanks so much for giving me the opportunity to share my wonderful boy with others.
It means more to me than you know.”

If you have a pet whose “tail” you would like to share (even if  they don’t have a tail) email me at peggyjudytime@gmail.com. I have connections and editorial rights.

By now you already know that Peggy and I rant and rave about the power of our minds – not to dwell on the negative, not to focus on what we can’t do but on what we are capable of.  When I came across this article by Dr Rossman I wanted to share.

Shifting Your Attention Can Change Your Brain

from The Worry Solution

“Repetitively shifting your attention to positive outcomes may actually result in growth in areas of your brain that start to do this automatically. My colleague, neuroscientist Dr. David Bresler, always says that “what you pay attention to grows” and research proves him correct.

“Neuroscience journalist Sharon Begley wrote in a 2007 Wall Street Journal article, “Attention, … seems like one of those ephemeral things that comes and goes in the mind but has no real physical presence. Yet attention can alter the layout of the brain as powerfully as a sculptor’s knife can alter a slab of stone.”

“She describes an experiment at University of California, San Francisco (UCSF) in which scientists “rigged up a device that tapped monkeys’ fingers 100 minutes a day every day. As this bizarre dance was playing on their fingers, the monkeys heard sounds through headphones. Some of the monkeys were taught: Ignore the sounds and pay attention to what you feel on your fingers…Other monkeys were taught: Pay attention to the sound.”

“UCSF researcher Michael Merzenich and a colleague wrote that through choosing where we place our attention, “‘We choose and sculpt how our ever-changing minds will work, we choose who we will be the next moment in a very real sense, and these choices are left embossed in physical form on our material selves.’”

Originally posted on Curious to the Max on January 9, 2012

Dear Human-beings who had the good sense, not to mention the intelligence, to enter my giveaway by commenting on or following CATNIPblog,

My mug can be your mug

Unless you are a blogger you might not know that every commenter and follower is catalogued in the statistics.  This makes my job easy keeping track of everyone (and how many treats I get).

1. If you don’t have a pet, go IMMEDIATELY to Zazzle.com/catnipblog and pick out the Mug or Mood Magnet you want and e-mail* your choice with your name & mailing address

You’ll get your treat via U.S. Postal Service

P.S.  It’s still not too late to follow because according to my blogging contract I receive a treat for every new follower . . .  in perpetuity.