Our brain wants us to feel good but it hasn’t quite figured out how to differentiate “good” feelings from “bad”.  When you feel shame, guilt and worry your brain is trying to reward you by activating its reward center! 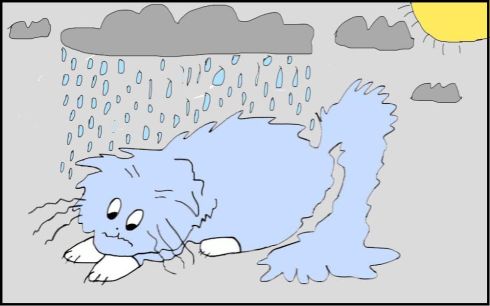 When you are being followed by a black cloud, Alex Korb* has some insights that might help you find the sun. It’s all about neuroscience.

According to Korb, “Despite their differences, pride, shame, and guilt all activate similar neural circuits, including the dorsomedial prefrontal cortex, amygdala, insula, and the nucleus accumbens. This explains why it can be so appealing to heap guilt and shame on ourselves — they’re activating the brain’s reward center.“

“A similar thing may be going if you just can’t seem to stop worrying. Korb says worrying stimulates the medial prefrontal cortex and lowers activity in the amygdala, thus helping your limbic system, your emotions, remain copascetic. His theory is that, even though worry is widely recognized as a pointless thing to do from a tactical point of view, apparently the brain considers it better than doing nothing at all when you’re anxious.”

How do you redirect your brain from “rewarding” you with guilt, shame or worry?

“Korb suggests asking yourself: “What am I grateful for?” His reasoning is chemical: “One powerful effect of gratitude is that it can boost serotonin. Trying to think of things you are grateful for forces you to focus on the positive aspects of your life. This simple act increases serotonin production in the anterior cingulate cortex.”

“Even more intriguingly, actually coming up with something you’re thankful for — not always an easy thing to do in a dark mood — isn’t even required. Just the acts of remembering to be thankful is the flexing of a type of emotional intelligence: “One study found that it actually affected neuron density in both the ventromedial and lateral prefrontal cortex. These density changes suggest that as emotional intelligence increases, the neurons in these areas become more efficient. With higher emotional intelligence, it simply takes less effort to be grateful.”

We’ve written about gratitude before – and will undoubtedly continue.  Quick and easy ways to refocus on what you can be grateful for is often hard when you’re feeling down.  Force yourself to name, list, draw 3 – 5 things every day.

They can be the same things every day and minor things taken for granted.

Examples of my gratitude:

Ahhhh. . .  I feel a serotonin surge in my anterior cingulate cortex and my  emotional intelligence increasing as I type . . .

*Alex Korb,  The Upward Spiral: Using Neuroscience to Reverse the Course of Depression, One Small Change at a Time

I don’t know about you but I remember being told as a child: “Do your best”, “Try your best” and questioned: “Is that the best you can do?”  I worried a lot that I wasn’t trying hard enough or I should have done better. Whether that led me to being a “perfectionist” (which some will dispute) I’ll never know.  After reading about the neuroscience research what I do know is,  from now on, I’m DECIDING to strive for GOOD ENOUGH.

Alex Korb, UCLA neuroscientist, maintains:  One thing to try is making a decision about what’s got you worked up. It doesn’t even have to be the perfect decision; just a good one will do.

“. . . Trying for the best, instead of good enough, brings too much emotional ventromedial prefrontal activity into the decision-making process.”

“In contrast, recognizing that good enough is good enough activates more dorsolateral prefrontal areas, which helps you feel more in control …” Korb: “Actively choosing caused changes in attention circuits and in how the participants felt about the action, and it increased rewarding dopamine activity.” 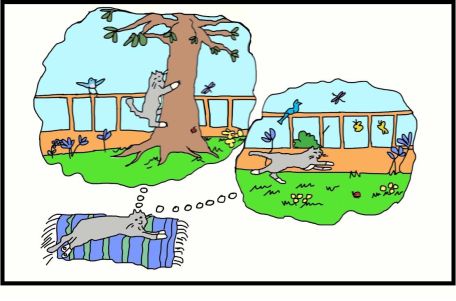 “A key thing here is that you’re making a conscious decision, or choice, and not just being dragged to a resolution. Your brain gets no reward for that.”

“If you’re still reluctant to make a choice between one option or another, the science suggests don’t worry, you’re likely to gain a positive bias toward the decision you make anyway.”

Alex Korb, UCLA neuroscientist author of The Upward Spiral: Using Neuroscience to Reverse the Course of Depression, One Small Change at a Time

Drawing friends and pets for my granddaughter

The last post I shared (click here) was my some of my earliest memories I drew for my grand daughter Lucy.  They didn’t hold her interest as she was 5 years old.   Perhaps when she’s 50 she’ll value them enough to share with her children. The more I drew the more my own memory […]

Curious to the Max & Freddie