Scroll to the bottom of the page for contact info

“They’ve both been around the block”

Peggy and my human, Judy,  worked for 210 dog years as Licensed Marriage & Family Therapists.   They are old cuz that’s a lot of years.  Now that they are both retired they weren’t doing much of anything except wandering around.  As a Certified Canine Therapist, RET myself, I want others to be happy.  I told them they’d better  share what they’ve learned and the tools they’ve taught others rather than have all their stuff dumped into a shredder after they’re gone.

Following my advice they started collaborating on this blog, to share what they’ve learned, the science behind mental, emotional and physical behavior and a lot of their hand-out and workshop materials.

I was really glad they got together because Peggy gives me treats.  I was glad when they told me they were collaborating on a new blog where they were going to share the materials and techniques they used to help clients when they were psychotherapists because as a retired Certified Canine Therapist I want everyone to know how to make themselves feel good. 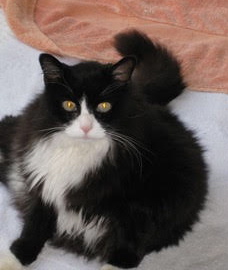 Now I’m upset.  They dedicated MAXyourMIND to Peggy’s cat Maui and CURIOUStotheMAX to Max the dog I never met.

Personally, I think bloth blogs should be dedicated to me since I’m the one who has the most blog followers.

They asked me to tell you about each of them . . . because I’m the only objective one around.

Peggy does have a serious side, even after being a PSYCHOtherapist for so many years.

Peggy  had a serious job as the director of a partial hospitalization program in a major metropolitan hospital in California.  She helped people with severe mental illness manage their symptoms, their moods and their life.  She never used catnip to treat phobias and alcohol abuse.  Whatever she used it helped.  Peggy developed courses and taught other therapists on aging and anorexia. She knew a lot about aging because she was growing old herself.  As far as anorexia she had to read up on it.  She was a pioneer doing  telephone therapy because she was so old the internet hadn’t been invented.

Peggy likes to read about science, biology, psychology and especially neuroscience. She reads everything she can find  on brain science since discovering the book The Neurobiology of Violence by Debra Neihoff  over 100 years ago. I told you she was old and serious. She is reading about bees right now, even though I think she would be better off reading about dogs.   (She posted a list of books about the brain on the Need to Read page).

When she comes to visit she gives me treats and plays with me when she’s not being serious.  She likes animals, of which I am one, because when she was 12 years old, she got a horse named Misty.  Misty was a lucky horse. In the summer Peggy would get up at 5 a.m. to ride, so Misty could avoid the Phoenix desert heat. Then Peggy came back home to sleep before school. And Misty slept in the horse house.

Peggy practiced drawing for this blog when she was a child by spending hours drawing horses. Lately, all she’s been drawing are cats which you’ve seen on almost EVERY post.  I am encouraging her to make dogs her new favorite subject.

Peggy likes to play a lot.  Even when she was a serious professional she did therapeutic playful expression and created fun activities that improved mental health.  Lots of her therapeutic activities will be posted on the blog – like how to draw stick figures to show goals and make your own personal logo and jingles.  She should learn how to draw dogs to show goals.

Now that she’s retired she goes to the beach, hikes, fishes, bikes, travels, and draws.  She’s a grandma now (I told you she was old).  She’s drawing cartoons about her life to share with her grand-daughter Lucy and wrote & illustrating a children’s book to tell the healing story about Maui, her cat.  There’s that CAT-thing again. Maybe she’ll draw me a dog logo.

Judy is my human. She has a serious side too even though she was a PSYCHOtherapist.  (She thinks if you call her Judith it means she’s suave and sophisticated and not so psycho).

She and I were in private practice together.  I was the one who soothed the clients and made them laugh.  She collected the fees and told them what to do.

She taught lots (she claims HUNDREDS . . .there’s no proof)  of healthcare professionals how to use Interactive Guided Imagery(sm) for health & wellness with The Academy for Guided Imagery for many, many, many years . . . so maybe there were hundreds because she’s old too. Hopefully, all those clinicians are carrying on in “sophisticated fashion” just like she taught them.

She did receive certificates of appreciation from the National Fibromyalgia Association for being one of 35 people in the United states in both 2006 & 2007  as a “Leader Against Pain”.  I’ve seen the certificates but there are only 2 not hundreds.

She loves anything creative, like me.  She’s pretty good at drawing but horrible at singing & dancing.   She sounds like a howling cat and has 4 left feet. She collects “valuable stuff” to use in creative projects and spends a lot of time organizing (rather than using) the “valuable stuff”.  She is always starting projects but so far I’ve not seen any that are finished.  She calls it multi-tasking, I think it might be closer to an attention deficit disorder.

She’s not quite a hypochondriac because she really does have things wrong with her ( besides the “psycho” stuff).  She has fibromyalgia, heart arrhythmias and grey hair. Since each is a “hidden” ailment (except the grey hair) she  doesn’t get the sympathy she wants. I try to make her feel better by letting her pet me .. .  a lot.   Every day we read Baha’i prayers together.  She thanks God for what He has given her, like me.  I thank God for what  He’s NOT given her because things could be a lot worse. 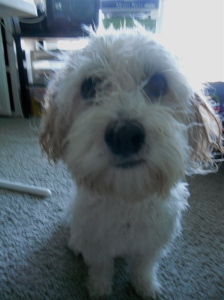 P.S. If you have a question or just want to say hi to me use the form below to introduce yourself and send a note!  I’ll make sure Peggy or Judy get back to you.

It’s better to walk alone than in a crowd going in the wrong direction even when it’s very difficult to find the path. Thanks to Sharon Bonin-Pratt, Ink Flare for adding this last line.