Fruit flies have been buzzing around my kitchen since I started recycling food waste for the environment.  Yes, yes, I’m using a special container provided by the city but those pesky flies still try to get in.  I can testify to their perseverance . . . and their ability to evade my swats. 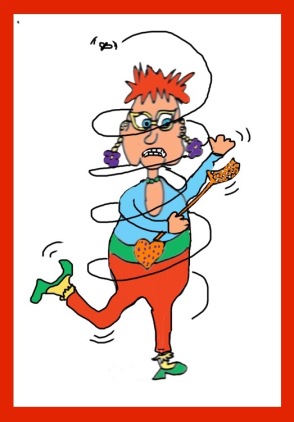 Perseverance and grit are important to work toward goals.  How do you stay motivated to do this? A team of researchers led by Technical University of Munich scientists have found one answer in the brain of a fruit fly. Yup,  fruit flies are ambitious and they can teach me something about staying with a task.

The researchers set up the fruit flies so they would go after fruit that smelled, but was kept out of reach, while their little legs ran on balls which measured how fast they were running – how much effort they were making. The experiment showed that hungry fruit flies would continue increasing their speed, until they ran up to nine meters per minute. Fruit flies who had eaten would stop more quickly than the hungry flies.

The researchers identified a neural circuit in the flies  that appears to cause this perseverance.  We humans have a million times more neurons than the flies have which makes it easier to figure out what each neuron does. With the help of electron microscopy, the neural circuit was identified.This circuit is located in the learning and memory center of the fly brain. Two neurotransmitters, dopamine and octopamine, (similar to noradrenaline in humans) regulate the circuit. Dopamine increases increases motivation; octopamine reduces it.

It turns out that theses same chemicals are in the brains of people and scientists think they also regulate motivation.

It turns out that my own neural circuits are motivating me to rid my kitchen of fruit flies.

4 comments on “The Secret to Motivation”

After painting ice cream sundaes, cupcakes, doughnuts and pecan pie I did a “chaser” of fruit.  It wasn’t as fun as the desert but a lot easier than dripping ice cream or frosting. (jw) Acrylic