“When Indrani Das needed motivation, she left the lab. The 2017 winner of the Regeneron Science Talent Search — one of the United States’ most prestigious science and math competitions — enrolled in her local ambulance corps as an emergency medical technician. She needed to be close to people: the kind of lives she one day hopes to improve.”

“It was this thought that there could be a person at the end of this experiment … that drove me to continue,” she said. Answering 911 calls helped with that.
Das has made headlines for engineering a new way to treat brain injuries and neurological conditions — essentially finding a method to aid brain neuron survival. The science is complex, but the potential benefits are easy to translate: a better quality of life for people living with Alzheimer’s, ALS, strokes and traumatic brain injuries.
With 47 million people with Alzheimer’s alone worldwide, that’s a lot of lives.”

“Das was educated at the Bergen County Academy for Medical Science Technology, a branch of one of New Jersey’s top public high schools. She describes a government-funded operation that allowed her and her cohort to “push ourselves to our limits” by conducting their own research projects.”
For the curious teen, that meant researching medical conditions considered incurable or irreversible. The brain became a focus. “Neurodegenerative diseases ruin a person’s quality of life,” she explains; “they take away from (a person’s) basic humanity.”
“It was that impact I wanted to understand and to study and to try and repair.”
With support from her parents and biology teacher-cum-mentor Donna Leonardi, Das embarked on her research. She began by growing and manipulating cell cultures, learning how they lived and died.” 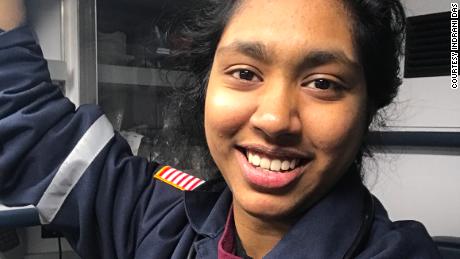 “I started working with these supporting brain cells called astrocytes (nerve cells that perform multiple functions in the brain, including post-traumatic repair and scarring.),” she says. “I managed to mimic an injury condition by giving them this chemical, which then made (the astrocytes) grow these spikes and start dumping toxic chemicals.”
“Das observed that in a brain injury situation, nerve molecules called glutamate would stop being taken up by astrocytes and would instead pile up around them and nearby neurons. The build-up of glutamate over-stimulates neurons, she says, “causing them to malfunction and die.”

To stop this required some bioengineering. Das used specially engineered microRNA to make the “injured” astrocytes recycle glutamate again. The neurons stopped dying as a result.

“Das’ research won her Regeneron’s $250,000 top prize, an award that opens doors for young scientists and counts 13 Nobel Prize winners among its alumni. Now in college, she’s researching at the Stevens Lab at Boston Children’s Hospital, studying microglia, another type of supporting brain cell.”
“She also hopes her work will prompt further research in brain self-healing and supporting cells, not just neurons. “By attacking the problem from more angles … by looking at factors around these dying cells, we’ll have a better chance at re-establishing a patient’s quality of life.
“I was determined to work as long and hard as it takes to find a way to save these brain cells in disease,” Das says, reflecting on her breakthrough. “I still am.”‘
https://www.cnn.com/2018/03/02/health/indrani-das-tomorrows-hero/index.html