Since breaking my ankle I’ve been trying to lose the 10 pounds I gained sitting around with my foot up and my mouth open.  Everyone keeps telling me to eat protein, fruits and vegetables – limit the carbs.  I keep telling everyone when I eliminate, (confession, I’ve never COMPLETELY eliminated, “reduced” is a better word) simple carbohydrates I get depressed.

“There are people we call carbohydrate cravers who need to eat a certain amount of carbohydrates to keep their moods steady,” said, Judith Wurtman, MIT researcher. “Carbohydrate cravers experience a change in their mood, usually in the late afternoon or mid-evening. And with this mood change comes a yearning to eat something sweet or starchy.”

“Thus, it’s not just a matter of will power or mind over matter; the brain is in control and sends out signals to eat carbohydrates. (YES!) . . .  if the carbohydrate craver eats protein instead, he or she will become grumpy, irritable or restless. (YES!, YES! ) Furthermore, filling up on fatty foods like bacon or cheese makes you tired, lethargic and apathetic. Eating a lot of fat, she said, will make you an emotional zombie.

“When you take away the carbohydrates, it’s like taking away water from someone hiking in the desert,” (YES! YES! YES!) Wurtman said. “If fat is the only alternative for a no- or low-carb dieter to consume to satiate the cravings, it’s like giving a beer to the parched hiker to relieve the thirst — temporary relief, but ultimately not effective.”

“Carbs are essential for effective dieting and good mood”, Wurtman says.(SHE IS SO SMART!) 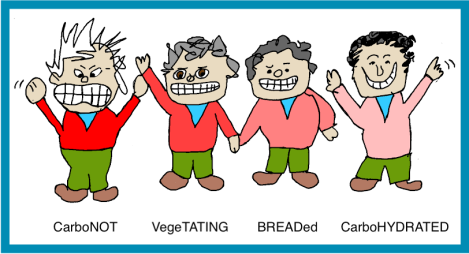 This is what is happening in my brain.

“When you stop eating carbohydrates, your brain stops regulating serotonin, a chemical that elevates mood and suppresses appetite. And only carbohydrate consumption naturally stimulates production of serotonin.

“When serotonin is made and becomes active in your brain, its effect on your appetite is to make you feel full before your stomach is stuffed and stretched,” said Wurtman. “Serotonin is crucial not only to control your appetite and stop you from overeating; it’s essential to keep your moods regulated.”

“Antidepressant medications are designed to make serotonin more active in the brain and extend that activity for longer periods of time to assist in regulating moods. Carbohydrates raise serotonin levels naturally and act like a natural tranquilizer.”

Wurtman’s husband, Richard Wurtman and John Fernstrom**, “discovered that the brain makes serotonin only after a person consumes sweet or starchy carbohydrates. But the kicker is that these carbohydrates must be eaten in combination with very little or no protein, the Wurtmans’ combined research determined.”

“So a meal like pasta or a snack of graham crackers will allow the brain to make serotonin, but eating chicken and potatoes or snacking on beef jerky will actually prevent serotonin from being made. (YES! YES! YES! YES!) This can explain why people may still feel hungry even after they have eaten a 20-ounce steak. Their stomachs are full but their brains may not be making enough serotonin to shut off their appetites.”

“And what do protein dieters (especially women) miss most after the second week? Carbohydrates. Women have much less serotonin in their brains than men, so a serotonin-depleting diet will make women feel irritable.”

*Judith Wurtman, director of the Program in Women’s Health at the MIT Clinical Research Center

Judy has written another book.  It’s for children and adult-children–and you get a sneak peek at it!! It’s a little known fact that not all frogs are princes in disguise . . . . . .  there are two genders, one of which is the “weaker sex”. The Frog Princess By Judith Westerfield “I’m of […]