I wait for windy weather to clean house.  I open all the doors and windows and let mother nature blow all the dirt out.  Luckily, I live in Southern California where it is breezy and sunny most of the year.  Luckily, I live in a house that has large glass sliding doors in every room (with the exception of bathrooms which I have to clean myself without mother nature’s help).

Turns out my house may be more microbe free than yours . . . . 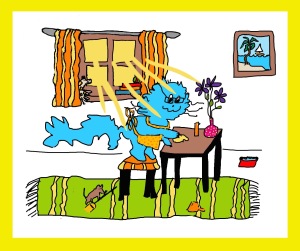 Letting Sunshine In by Peggy

University of Oregon scientists used real dust from inside homes around Portland to test the effects of sunlight, UV light and darkness on bacteria found in the dust. Researchers “. . .  set up a study of dusty, dollhouse-size rooms to compare what happens in rooms exposed to daylight through regular glass, rooms exposed to only ultraviolet light and those kept dark.”

“After 90 days (because that’s about how long it takes most people to get around to vacuuming, they said), they sampled the dust and analyzed the types of bacteria present.”

“What they found surprised them and confirmed what your grandmother already knew: Rooms exposed to daylight have fewer germs. In fact, the study showed that the lit rooms had about half the viable bacteria (those that are able to grow), compared with dark rooms. Rooms that were exposed only to UV light had just slightly less viable bacteria than ones exposed to daylight.*

While it may not sound like much, “6 percent of millions of cells is still a lot of microbes,” “Until now, daylighting [illuminating a building with natural light] has been about visual comfort or broad health. But now we can say daylighting influences air quality.”

The daylit rooms in the study also had less of the types of bacteria associated with human skin, which people shed as they move around indoors, and more closely resembled outdoor bacterial communities. Some of the human-associated bacteria species that didn’t survive in the lighted rooms are known to cause respiratory disease.

*Research was published in the journal Microbiome.”

Nobody knew that alligators could regrow their own tails

A face only a mother alligator could love.  Yet, a remarkable critter: “The species, scientists say, is more than 150 million years old, managing to avoid extinction 65 million years ago when their prehistoric contemporaries, the dinosaurs, died off.” “Males average 10 to 15 feet in length and can weigh 1,000 pounds. Females grow to […]