I’ve barely made a dent in the editing down of this article.  Why?  It’s a big article, I don’t know where to start and I am  blaming it on my brain. 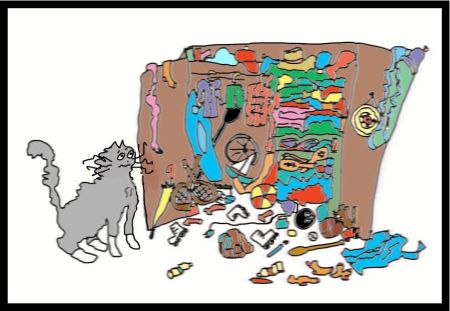 “Closets bulging with clothes and shoes. Plastic bins of stuff shoved under the bed. Stacks of mail covering the dining table. Has anyone seen the car keys?”

“It’s spring, time of rebirth and rejuvenation. Time to throw open the windows and do some spring cleaning. But the magnitude of the project is daunting. How to begin?”

“If you want to know why it’s so difficult to tackle a big project like spring cleaning, blame your brain, said Randall O’Reilly, professor of psychology and neuroscience and director of the Computational Cognitive Neuroscience Laboratory at CU Boulder.”

“The brain is wired to be very cautious and conservative in starting big projects, because once you do start, it takes over your brain,” he said. “The brain, researchers think, is wired to track progress towards whatever it is you’ve decided to do, like spring cleaning, which is hard work. You have to make a lot of difficult decisions and the outcome is uncertain. Your brain recognizes that and says, ‘Maybe I won’t start on that project after all.’ It’s an adaptive property of the brain.”

“Once we get over the initial stalling and begin the project, the brain rewards us with small hits of dopamine as we make progress. This provides an incentive to stick with the task.”

“Dopamine is a chemical released by neurons that sends signals to other nerve cells and plays a major role in both mood and reward-motivated behavior.”

“So, you’ve tackled cleaning and decluttering and you’re making progress. And then you notice the teapot that belonged to your grandmother stored in the back of the cupboard. It’s sweet and dainty and evokes fond memories of your grandmother, but it’s not your style at all. Now you’re confronted with a dilemma: Keeping a teapot you never use is taking up much-needed space, but getting rid of it would feel disrespectful to your grandmother.”

“Things with an emotional attachment take on meaning,” O’Reilly said. “The teapot is not just a teapot. It has a personal history, so it’s unique in that sense. If you get rid of the teapot, it feels sacrilegious. It’s valuable to you because it carries that authenticity and history with it, so it feels like you’re disrespecting that value.”

“So, why do we accumulate clutter? The answer is found in the dopamine system, which is based on expectations. When we accumulate something or have a pleasurable experience, the brain releases dopamine and we feel good. As soon as our wants and desires are satisfied, however, the brain discounts that feel-good moment.”

“You can see mathematically that the brain is constantly comparing what we have versus what we expected to get,” he said. “Every moment of our lives, that’s what our brain is doing. How much better is that movie versus what you thought it would be? How much better was that cookie than you remembered? Every single thing is being compared to a baseline of what your expectation is.”

It needs to be better than what you expected

“Attachments to things are like those expectations. We want them and feel that we need them. This is where it gets diabolical, O’Reilly said. If something we like is meeting our expectations, we no longer get a dopamine burst. Our brains are constantly trying to up the ante, so we continue to acquire more stuff to feel better.”

“To get the dopamine surge, the experience needs to be better than what you expected. If it just meets expectations, guess what? No dopamine for you! The flip to the reward of dopamine is a downer.”

“If the experience was less than you expected, there’s actually a reduction in the firing of dopamine neurons, leaving you feeling disappointed,” O’Reilly said. “Then the brain tries to come up with new ways to get the dopamine. It needs to be better than what you expected.”

“The expectation system is what drives learning,” he said. “This system in our brains drives us forward, to learning more and more. You’re changing your expectation level, your sense of self. Don’t have attachments. Have ambition.”

Loss Aversion – why we don’t declutter.

Click Here: Spring has Sprung and so have I

4 comments on “Daunted by “spring” cleaning? Blame your brain”