I have a garden plot.  This year I had a bumper crop for the neighborhood vermin.  What the rabbits didn’t eat the rats finished off.  I never caught any rats in action but I don’t think rabbits can climb up apple trees or tomato vines.   Based on research the neighborhood rabbits and rats are not only well fed but are very mellow. 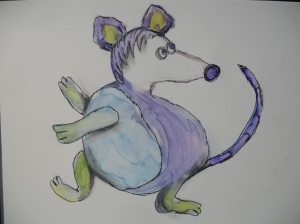 Most gardens are sources of fresh food, but increasingly they’re also an extension of therapy for people with mental health issues, such as post-traumatic stress disorder, or PTSD; depression; and anxiety.

It’s called horticultural therapy. And some doctors, psychologists and occupational therapists are now at work to test whether building, planting, and harvesting a garden can be a therapeutic process in its own right.

“Social scientists have also been looking at gardens built by and for the homeless, ex-convicts on probation and hospital patients. The results of early studies suggest they have a positive impact. Most people tend to not revert back to bad behavior and many make changes in their lives for the better, the studies show.”

“For now, that evidence seems to be enough to fuel the burgeoning field — programs like a camp for troubled teens in Hawaii, called Pacific Quest. Program staff tell The Salt they believe the garden is a beneficial tool to emotionally engage the kids.”

“For a few months, students — many with psychological issues from trauma, adoption, depression — band together and run a garden from the seed to the dinner plate. “They are introduced to the garden by eating the food planted by [a camper] who was in their shoes just a few months ago,” Travis Slagle, a Horticultural Therapy Association member and land supervisor for Pacific Quest, tells The Salt. “That builds their curiosity.”‘

A 2007 study in the journal Neuroscience found a bacteria found in soil linked with increased serotonin production in the brain — a sign that gardening could increase serotonin levels and improve depression.

“Much of the science behind just how gardening affects the mind and brain still remains a mystery. What scientists do know is that gardening reduces stress and calms the nerves. It decreases cortisol, a hormone that plays a role in stress response.”

Next year I’m planting flowers. It’s only fair I give the snails their share of calm.

14 comments on “How getting your hands dirty calms your mind”

Kindness, Compassion to Animals, Each Other and our Planet.

There are people and animals at risk during these times. We’ve been working hard to made our Curious Critters available on holiday products to support our charity. 50% of profits from CURIOUStotheMAX Zazzle sales is donated to: The Gentle Barn* (the other 50% goes to the cost of our URL’s) We were planning a trip to […]